HEADWATERS OF THE DOG TRAINING DEBATE: The Myth of Aggression Based Dominance 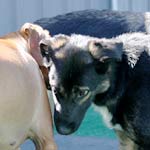 "....myth that dominance in the animal world is achieved through aggression. The assumption that rank has been won through bloody battles, pain and anguish"

Unless you’ve been under a rock for the last 20 years, you know the dog training world is deeply divided on training philosophy and methodology.  I’ve been thinking a lot about this schism over the past couple of weeks, and I HAVE FOUND THE HEADWATERS! If I’m not mistaken, the entire rift can be traced back to one, critical source: the myth of aggression based dominance.

When an assumption is made or an assertion stated that sounds logical, often no one bothers to check facts.   If it’s easy to believe, it is.  And the longer that assumption is out there unchallenged, the deeper it is woven into the fabric of popular belief and truth.

Such is the case with the myth that dominance in the animal world is achieved through aggression.  The assumption that rank has been won through bloody battles, pain and anguish – the alpha male dominating brutally over his challengers – is at the root of the dog trainers’ Great Divide.

One school of dog training thought is firmly rooted in the belief that dominance, subordination and rank in general are established through this type of confrontation and aggression.  Because confrontation and aggression with a dog can produce negative, sometimes dangerous results, all forms of correction and the entire notion of outranking a dog are avoided.  Those trainers that ascribe to this philosophy entrench themselves in the positive-reinforcement-only camp, opting to teach only new and alternative behaviors.  On the other side, trainers that believe this premise to be untrue, stand their ground in the “balanced training” camp. They use positive reinforcement to teach new behaviors and correction to stop unwanted ones.

What a shame that so much divisiveness has stemmed from an erroneous assumption!  And how confusing for the poor, unsuspecting dog owner that wades innocently into the swirling waters of dog training philosophy!  One trainer says one thing, another contradicts; one book advocates one style and demonizes another.  The next book says just the opposite.  The poor dog owner!  They’re afraid to do anything and the dog suffers in the wake of their confusion.

Let’s set the record straight.  Dominance, subordination and rank in the world of social group mammals are NOT routinely determined through the use of force or aggression! All this to-do and argument over a myth!  It’s really a shame, and our dogs, ultimately, are the losers.  Read on.

Rank is determined one way and one way only: the ability to stop another from doing something. If you can do that, you have rank and status.  You own resources.  You get your own way.  You tell everybody else what to do.  That sounds like rank and control to me.  I don’t see any blood.  I’ve watched this social scene play out for over 50 years, with cows, horses, dogs…even humans.  Curiously, the ones that rise to the top of their social group – be they cow, horse, dog or human – are strong, quiet, focused individuals, not blustering bullies.

Let’s take dogs in particular.  Except in rare instances, when an alpha dog stops another dog from doing something he doesn’t like, he does it with symbolic gestures and actions that only hint at his greater physical power or ability, yet to be called upon.  Nature seeks harmony, not confrontation!  A dominant dog will stand on his tippy-toes to appear taller, in order to convince the subordinant to back off instead of fighting. He might body-bump into another dog to show that he is bigger and weighs more to hint that he would win a confrontation – in order to avoid one.  He will bark and show his teeth, again to hint at his power, and to avoid escalation into a bite fest.  Even when the alpha dog nips another dog, it is conversational, not confrontational.  The alpha is saying, “I’m warning you to stop that.  Don’t make me use all of my teeth – see how big they are?”  The subordinate dog agrees, gives up whatever he was doing, and harmony is restored.

In the dog world, correction is not angry, vindictive or confrontational.  It is pragmatic.  It is a means of stopping a behavior and achieving rank without fighting.  In dog training, corrections given without anger can do the same.  Dogs understand and accept correction; what they take offense to is anger.  The two are very different, and the key is understanding that difference.

I’m on a mission to break down the myth of aggression-based dominance, mend the rift between my fellow dog trainers and help bring every dog owner under a common philosophical tent.  Dogs need leaders not cookies, and boundaries not punishment. When we can agree that rank, status and leadership involve control not confrontation, we’ll be on the right track.

5 thoughts on “HEADWATERS OF THE DOG TRAINING DEBATE: The Myth of Aggression Based Dominance”