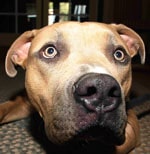 " Selective breeding has changed the “wrapping”, but not the contents. Domesticated dogs – be they toy or giant, sporting or non-sporting, long-haired or short – are still at their core, DOGS,"

1. First and foremost, dogs are animals that just happen to live with humans. We domesticated the dog, not because we wanted a companion, but because we needed their skills of hunting, killing and defense to help us humans survive and prosper.

2. Selective breeding has changed the “wrapping”, but not the contents. Domesticated dogs – be they toy or giant, sporting or non-sporting, long-haired or short – are still at their core, DOGS, with all of their original canine instincts, drives and social language.

3. Dogs live by instincts, not by intellect. Dogs are reactive, not thoughtful animals.

4. Puppies are taught canine language (dog talk) by their mothers, prior to weaning. Mother dogs initially restrain their pups with their mouths or paws. As the puppies mature, their mothers will growl, lip-curl, bark and even nip their pups to set behavior limits in the whelping area. The puppies, in turn, learn this canine social language before they venture out into the greater dog world.  Ask any breeder.

5. Adult dogs set limits among themselves by barking, bumping and nipping. Humans are able to communicate in this same language through tools that mimic barks, nips, bumps and restraints.

6. Dogs are programmed to do best in social groups – whether it be a familial dog pack in the wild, or a human family. As social group animals, they depend on the direction of others to shape and limit their behaviors. Dogs do NOT make responsible independent decisions, because they were not designed to live independently. Dogs need a manager!

7. The instinct to survive attracts dog to strength, and repels them from weakness. After all, if you are hanging out with the strongest dog, you are less likely to be picked off by the mountain lion. If you follow the weak, slow or stupid dog down the path, he’ll be the mountain’s lunch and you’ll be dessert.

8. Strength – both physical and mental – determines status in the group. Because status is a product of intelligence as well as physical ability, it is determined NOT by confrontation, but rather by the ability to stop others from doing things. The dog that can successfully stop another from doing something he does not like, has status.

9. The“alpha” or top dog earned that position by being able to stop any dog he chooses from doing anything he doesn’t like. His status was achieved through control (disallowing behaviors), not necessarily confrontation.

10. Dogs avoid confrontation whenever possible. Instead, they opt to use symbolic gestures of power (posturing, growling, barking, alpha-rolls) to gain status and the control that goes with it. These gestures usually get the job done!

11. Dogs take orders from those with higher status than themselves; they ignore those of lower status.  A dog will follow and obey a “strong” human, but ignore or run away from a weak one.

12. Yelling and anger reveal to a dog your weakness, not your strength. When humans yell, they telegraph that they are desperate, unsure of the outcome, on the ropes and out of options. Yelling is interpreted by the dog as weakness …and weakness, quite naturally, will be ignored.

13. For a human to control a dog (get them to obey in the face of conflicting priorities), they must outrank their dog through higher status. This is achieved by disallowing behaviors that are unwanted, not by confrontation, and not by cookies.  If you want control over your dog, simply learn how to disallow.

14. All dogs gravitate toward pleasure, and work to avoid anything unpleasant. This is why you can teach almost any behavior with a treat as the pleasurable reward.  The dog performs to get the treat.   On the other hand, treats won’t get a dog to stop any behavior that he finds more exciting than the cookie.  The alpha dog, however, can stop unwanted behaviors, and usually without conflict.  He will posture, bark or nip to stop anything he does not approve of. He doesn’t need to fight because the dog on the receiving end finds his posturing, barks or nips unpleasant, so ceases the behavior. Humans can effectively disallow unwanted dog behaviors by simply and cleverly making them unpleasant to the dog, or at least less pleasant than the alternative. Aggression is not necessary, but consequence is essential.

15. Consequence is not punishment. One is pragmatic; the other is emotional.

16. Establishing boundaries and managing unwanted behavior with less pleasant outcomes is a natural part of canine social culture, and even necessary to the psychological well-being of the dog. In a dog’s mind, in order for him to survive, there must be structure, rules and order, with a clear leader at the helm. The leader is the one that sets the boundaries, not necessarily the one with the cookies.