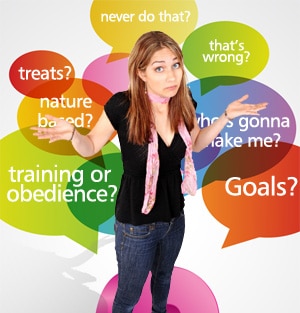 "Dog trainers tend to fall into two camps: those that Train with positive reinforcement only and those that use a balance of reward and consequence to achieve Obedience. Read on about Treat-Based & Purely Positive Training versus Nature-Based Obedience...."

If you talk to dog trainers these days, the only universal advice they will give is that the other trainer is doing it wrong.

One will call another “ineffective.” Yet another will label his/her competition ‘”old-fashioned”, even “barbaric”. Good grief!   What’s a dog owner to believe and how do they choose the right trainer and training style for them?   I hope this will help make sense of it all. It’s a discussion that we have every day with new clients, here at Dairydell.

How Training Differs from Obedience

First, it’s important to distinguish between training and obedience for purposes of this discussion.

Training is about teaching a dog a response to a cue, like the words Sit, Down, Come, Over, etc.   But as most dog owners know, just because their dog knows the meaning of Sit or Come, it does not necessarily mean he will do it, especially if he’s got something more exciting on his mind. He may be, in fact, “trained” but not dependably “obedient”. Dogs have a “Do It/Don’t Do It” decision scale in their heads. They will always choose their most fun or pleasant option. Training involves convincing the dog that what is being requested will be more fun and worth doing than the alternative; it plays on a dog’s natural bent toward self-interest. Reliability of training depends on how attractive the owner can make that which is being requested. Especially if there is no consequence for non-response. In training, response is more optional than mandatory.

Obedience is more about “Who’s gonna make me?” There is follow-through. And reasonable, thoughtful consequence. It taps into more canine instincts – consciously avoiding bad choices and that of natural deference to a demonstrated Leader. Dogs naturally do what they like and avoid what they don’t. Leaders establish the rules and enforce them. Getting a trained dog to be obedient in the face of distraction involves follow-through and enforcement. Obedience training, in this true sense of the word, involves reward for response, but counter-positioned with just enough consequence for non-response to change the dog’s mind in the desired direction – because of the dog’s instinct to choose self-interest. Obedience training also taps into a dog’s natural inclination to willingly follow and obey a strong Leader. (This is a deeply-rooted survival instinct.) In fact, in Nature-Based training, the goal is a dog that truly sees the owner as a Leader in control and minds and give deference in all ways, making most formal commands unnecessary.

Dog trainers tend to fall into two camps: those that Train with positive reinforcement only and those that use a balance of reward and consequence to achieve Obedience.

Treat-based and purely positive training found its niche years ago in shelters, where many dangerously aggressive dogs ended up. Working safely with an aggressive dog requires the utmost skill and experience—certainly a skill level far beyond that of the typical volunteer or kennel worker. Those that attempted to “punish” or “dominate” an aggressive dog could find themselves short a finger or two…or worse. Purely positive training was being used on dolphins at water parks with some success, after dolphins, too, had begun attacking aggressive, punitive trainers. They found that they could encourage a dolphin to “perform” a requested behavior in a controlled environment with positive reinforcement, hence avoiding dolphins fighting back at their trainers. Predictably, this non-confrontational approach helped shelter workers stay safe with aggressive dogs, as well.

Fast-forward to today. What began as a safety measure to get through the day with dangerous dogs without sustaining bodily injury in a controlled environment has become a movement and cause celeb – Purely Positive Dog Training as the One True Way. Enlightened. Modern.  All others barbaric and dangerous. The origin of the movement and the original kernel of truth — that confrontation and aggressive handling can, indeed, lead to reactive aggression in some dogs — has morphed into the current banner of the Purely Positive training movement: that Consequence Causes Aggression, and resulting training protocols that disallow correction of any sort in the training process.

Nature-based training, by contrast, is rooted in Mother Nature and Her animal world. It is based on the concept of universal group hierarchical balance and attempts to mimic the peaceful, but clear establishment of hierarchy and rules as it occurs between dogs. Nature-based trainers model themselves after canine Leaders in the animal world, not depending on aggression or intimidation to feign dominance, but instead gaining status by establishing rules and boundaries calmly and enforcing them without apology. Leader dogs will enforce rules with communicative barks and nips. Nature-based trainers translate “barks” with penny cans or other sounds and “nips” with a variety of training collars. In all instances, this is done without yelling, intimidation or aggression, since this would not be true to the natural model of quiet control.

This atmosphere of name-calling is unfortunate and unnecessary, since both training styles have value and purpose in their own right. They can each stand on their own merits, without denigrating the other.  So…how does one choose?

What Are Your Training Goals?

To decide on the best training style for you, ask yourself “What do I want to accomplish?”

If your goal is to compete in one of the many dog sports like Obedience, Agility, Rally, Flyball, or Herding – you need only performance training. Trained behaviors are performed in a controlled ring environment and within a prescribed time limit. Purely positive training is the perfect fit for all performance sports.

What is Your Dog’s Personality?

If you have a strong-willed dog that has shown dominance toward you or other humans, or has barked or growled when you have tried to force him to do something, like clip his nails or move him off the couch — you could have a dog that  already fancies himself the Leader. Trying to take the reins of power away from him might not be a good idea at first.  Starting with purely positive training is recommended for you and your dog, to avoid him considering you “insubordinate” and consequencing you with a bite(!)   In many cases, a gradual transition of power can occur, and the dog can more willingly defer to nature-based obedience in the future.

Or maybe you have a dog that slavishly obeys already, because of his naturally subordinate personality and all you need are a few commands to simplify daily life.  If your dog rarely challenges your authority, usually listens and defers under distraction, then purely positive training will be fun and productive for you and for him.

If you are like the majority of dog owners, however, you are not interested in competition, you don’t have a dangerously dominant dog nor a slave. Your pet is just stubborn, has bad manners and won’t Come when he’s called– even to a cookie.  These mainstream dogs are hungry for leadership and blossom with nature-based training.  Another factor to consider is the safety that true obedience provides.   Dogs that are more obedient are easier to control and keep safe. You might consider Nature-Based training, like the Dream Dogs program here at Dairydell Canine in Petaluma, CA. www.dairydell.com. Or call us at (707) 762-6111.

So you see, there are different styles of training for different dogs and purposes. No one style is “right” or “wrong”. They are just different and offer a choice to today’s informed dog owner.