Breed Differences: Variations on a Theme 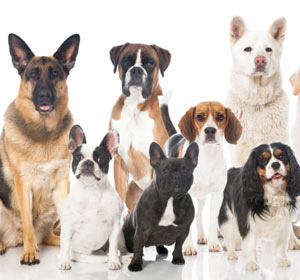 "Choosing a dog is a big deal. How do you make the right choice? Is it pure luck, or is there a way increase your odds of success? I think so! My system is this: First, choose a breed with breed characteristics most compatible with you and your lifestyle."

Then, understand that individuals within a breed can have widely different personalities, and choose one with a personality that you can control and keep happy. IE: if you are a passive person, do not choose a pushy, willful dog. If you are loud and reactive, do not choose a timid dog. (More on all of this in a separate post.) First – understand breed tendencies.

Remember that all dogs are, at their core, hunters and predators. Early man used dogs because they were predators, and could help him hunt for food more effectively. This original Basic Model dog was skilled in two areas: hunting and self-protection. He needed to eat and he needed to survive. Nature equipped him to do both. Knowing how to protect themselves and their pack is how dogs have survived for thousands of years without fences. Hunting for prey is how they fed themselves before kibble and canned food.

As time went on and civilization progressed, however, man needed dogs to do more specific tasks for him, like guarding his livestock, herding his sheep, getting rid of rats and mice or pulling his goods to market. Man took this basic hunter, and bred it selectively to enhance certain of his traits and diminish others so that his purpose would be served.

From this Basic Model, man bred different dogs to be better at different things. For example, the dogs he bred to help him herd his sheep were bred to be better at eyeing, stalking and chasing, but not so quick to kill and eat. Others, like the terriers, were bred to chase, grab and kill those foxes in the henhouse and those rats and mice eating the grain. As modern dogs’ functions were refined, their looks changed. Originally this was not intentional, just a byproduct of the selective breeding that enhanced their behavior and performance. If you did the job, you got to breed and reproduce with another dog that could also do the job. Looking pretty had nothing to do with it. So originally, form followed function! Breeding a dog for its “look” is a relatively new practice in terms of the overall history of dogs.

All of the purebred dogs we know today (as well as the breeds making up that ‘mutt’) can be divided into several major Groups.

Knowing what each breed group was bred to DO, will give you an important insight into whether or not you want to take on what nature and generations of selective breeding have produced.   Don’t choose a breed because it’s beautiful. That beautiful dog may have been bred to do things you don’t want in your life!

Dogs of this group were bred to assist man in hunting birds and small game on land or water. Included in this group are Pointers, Retrievers, Spaniels and Setters. The Basic Model dog was tweaked to encourage finding, eyeing, and grabbing, but NOT stalking, chasing or killing. Because stalking, chasing and biting to kill has been discouraged in their breeding, sporting dogs are generally less apt to chase cats or kids, and less apt to bite.

A Retriever especially, with his soft mouth, can be a great family pet – IF the individual personality is right, of course. (FYI , even some Golden Retrievers bite!)

Hounds are all about finding, chasing, and cornering the prey. Once they corner it, they either let the hunter know where it is by barking or baying, or they take on the prey themselves. Be prepared for a noisy dog if you choose a Hound bred to bay. The Basic Model dog was tweaked into Hounds by emphasizing finding and chasing. They can make great pets, but only for those prepared for the challenges. Scent hounds are notorious escape artists and need an ultra-secure yard. Sight hounds will chase anything that moves; perhaps not the best choice for households with cats.

The big dogs of the Working Group were bred to do big jobs like guarding property or livestock, pulling sleds or carts, and even locating humans lost in the snow or water. For these working dogs, the Basic Model dog was tweaked to exaggerate either its protection instinct or its finding skills. They make dignified and stately companions that are intensely loyal to the family and make superb watchdogs – but the flipside means they often prefer a smaller circle of familiar friends and commonly dislike the party scene of doggie daycare or dog parks.

Herding dogs are intense, focused and need a job. If they can’t herd sheep or cattle, they will herd you or your kids. If they can’t nip at the sheep’s heels, they’ll nip at your kids’ heels. Herding breeds are the Basic Model dog, tweaked to exaggerate and refine the predatory part of hunting: stalking, eyeing and chasing/nipping. Most herding breeds are not for the inexperienced owner, not for families with small children, and not for the owner that works all day and must leave his dog home alone. These breeds are supremely intelligent and easy to train, but do often not blend well into doggie daycare or dog parks, as their drive to control often leads to scuffles.

Terriers were bred to be Terminators. Farmers wanted rats, foxes and other pests dead and out of there, and the terriers were developed to do just that. The Basic Model dog was tweaked to be especially good at finding, chasing, grabbing and killing. They may not be the best choice for households with cats and think twice if you have small children, as Terriers are not known for patience or self-control. That said, the tenacious and spunky Terrier has millions of adoring fans throughout the world. Be sure you have the personality to handle him.

These adorable little dogs, bred down from their larger cousins, weren’t developed to hunt but the Basic Model dog still lurks beneath the surface. (Why else would Fifi love to chase and bite her squeaky ball?) They were bred to be companions and are a good choice for small living spaces or urban dwellers. Toys can, however, be extremely territorial, distrust strangers and be protective of their home and their human. Again – it’s all about the personality of the individual dog and early training!

This has become sort of a catch-all group for breeds that do not fit into the other divisions. So no generalizations can be made about breed tendencies, except to say that all Basic Model dog characteristics can be seen in this group. Stay tuned for my spotlight post on the Non-Sporting group and I’ll review the popular breeds in it.